Welcome To The Tales Of Tennis Crescent In Riverdale

Welcome to the beginning of the next chapter of my life.

Nearly four years ago – in September 2010 – I sold my vintage brick and beam loft in The Button Factory located in the Little Italy Neighbourhood of Toronto. After 15 years of ownership – and a journey that started as a member of the original development team of this enchanting adaptive reuse conversion who bought an 'unfinished shell' for himself – I shared my last eight months living in this breath-taking unique urban space adding all the final touches preparing it for sale in my blog called Rejuvenating The Button Factory. Here's a photo of the exterior that belies its authentic industrial vibe: 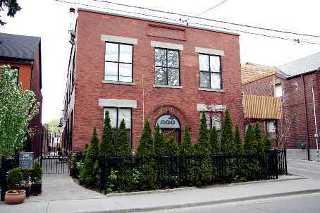 I sold this Dream-Come-True Loft (link to interior pics) for pragmatic and prudent purposes and, well, a bigger dream. Cresting into mid-life as a top-producing realtor I realized my 'Bright Lights Big City Toronto' life, while perfect for me at this stage of my life, is not my permanent future. Although I've called Toronto home for the past 30 years – such that I know I will always want to have a residence here – I spent my formative years growing up in Victoria BC where most of my family still live. I love Victoria (In fact, I covet owning a 'family compound' there or – as I threaten my sister and brother-in-law – I may just move into their lower level suite – and by default instantly create one. Haha).

Given that I already have a place to crash when I'm out west, there's no urgency to acquire property there yet. However, I know in my heart that I enjoy time near the ocean where nature and chill rule supreme. Plus, the winters here make me cold and bitter. So after much reflection, I recognized if I desire a future living warm seasonally in places I love with people I love, I needed to be proactive and make it happen. Selling The Button Factory to extract my capital was a way to embrace change and create it.

While this process was happening, I was cultivating a desire to own an income property – like a modest and manageable two or three units – as it sensibly offers the ability to leverage one's capital against a mortgage debt covered by the dwelling's income stream. Frankly, if you're disposed to having tenants paying your mortgage, it near guarantees financial security in one's retirement years. As I discussed this with my friends, it blossomed into the motivation and story behind my joint acquisition of a dilapidated vintage triplex in Charlottetown, PEI – which I co-own with best pal of 30 years and Urbaneer team member James Ormston – that is just nearing completion. Purchased in 2008, James and I have spent the last five years taking this wreck of a property and elevating it into a luxury vacation rental and Summer Home called The Black House. The plan is that, in 20 years when the mortgage is paid off, James and I will each have a suite and the income from the third unit will cover the operating expenses. In the interim it's a pretty swish Guest House which I adore and frequently visit. My blog sharing this journey series is called The Tales Of Upper Hillsborough. Here's a picture: 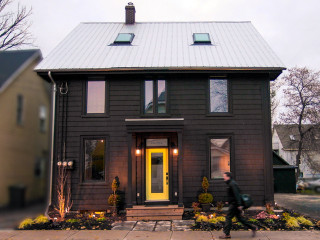 When I sold The Button Factory in 2010 I knew it would take some time to find the right place to apply the 'income property proposal' here in Toronto (though not nearly 4 years!). After all, I'm seeking a place in Toronto where each of the suites can serve my own needs depending on any possible changing situation – from occasionally to permanently – for me or for many – and for right now or later. The property not only had to make financial sense, but also be enough of a blank canvas that I would be able to express my creative point of view. After all, having lived in lofts with ceilings heights ranging from 10' to 20' for over 20 years, one can't just move into a conventional property and be content (this is the curse for any loft lover who has to face the possibility of 8' ceilings again).

On vacating The Button Factory I moved into my Movie House Loft “temporarily”, after renovating it as a conciliatory boutique live/work residence while I searched for the right opportunity. Located two blocks from The Button Factory, The Movie House – my third development as a member of the original development team in 1997 – initially served as Urbaneer's headquarters – and guest accommodations – for the first 14 years of ownership. While it worked well as it was, I decided to reward myself and indulge my design practive by upgrading it into a Swish Space and perhaps not-so-temporary home (I guess my intuition knew it would take a few years to find the next purchase!). The major-cosmetic five-month renovation installing the 'best of the best' and near-custom-everything was light on prudence but favoured quality of life. This is reflective of my belief in quality, attention to detail, and nurturing impact of domestic creature comforts. In fact, the Movie House is the most bespoke of all my renovations – and certainly the most expensive on a price per square foot. You can read about the journey and see pics in Renovating The Movie House Loft. Here's a snap: 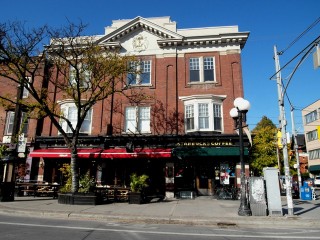 Serendipitously, just as I was about to purchase a new to-be-built townhouse in Little Italy as a transitional measure, I realized a listing I was actually selling on behalf of long standing clients was a better solution to my long term objective. In fact, I was showing it to reluctant clients outlining all the benefits and merits when – like a lightning bolt – I realized I was actually standing in the property I should buy. How strange to suddenly realize the listing where you're representing the Sellers is the property you want. So – with much delight and chagrin – and after two weeks on the market – I bought it. This is my next ambitious project I'm affectionately calling 'The Tales Of Tennis Crescent'.

This 1960s semi-detached purpose-built 2-unit dwelling located in Prime Riverdale is just five streets from the Broadview Subway Station and The Danforth. Although I hadn't considered locating on the central east side of the city, I was drawn to the Triple AAA location and the four car parking – two ingredients that spell resale desirability – and convenience. Situated in a family-friendly neighbourhood with a top-notch school, fantastic shopping amenities and sandwiched between two incredible lush parks, the acquisition price reflected the value of the land in this location. The dwelling, in many ways obsolete in size and utility – and not terribly attractive – is another story. Here's another pic. I own the side on the right. 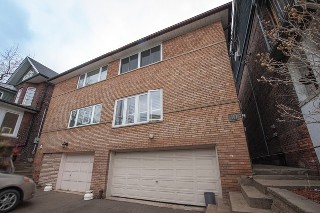 This Swell Dwell is one of those solid – albeit plain – 1960s yellow brick dwellings that were very much a Toronto flavour in its day. Built to last, extremely functional, unadorned inside and out – and with highly despised and costly electric baseboard heating – the property had once been deconverted into a single family dwelling with two kitchens – and then subsequently returned into two units earning low to modest rents. Built into a gentle hill – the street actually winds amongst the original ravine setting – the garage and private drive dominates the street facade, with a side entry serving as access for the two units – of which the rear of one walks out onto a large garden and the other having a rear second-floor deck.

The main floor unit – which in its past deconversion has been configured into a large studio apartment – was home to a young couple with a toddler, cat and dog – which meant a lot of stuff and warm bodies were contained as best as possible – yet was its own losing battle in spatial limitations. Renting under market, the lovely tenants gave notice while the house was up for sale making vacant possession of this suite a certainty. The upper unit – home to a couple with a young child – pay a market rent plus half the utilities – and are awaiting completion of their own property purchase which is under construction and ready for occupancy in around a year from now. I've assumed their tenancy.

My first course of action – and the start of this journey – is to return the main floor unit back into its original configuration as a two bedroom unit – and potentially occupy as required – while I build a team to navigate a more substantial undertaking next year. Some think spending any money on a house that will undergo a massive renovation in the near future is unwise. After all, a lot of the changes may simply be torn out again. And that's true, but as I will soon be sharing with you, a lot of the money will be going into items which can be re-integrated into the house as it evolves. For example, the kitchen cabinetry, counters and fixtures are being designed to come apart and go into the lower level at a future date. The same goes for the appliances, washroom fixtures, storage built-ins and click-in plank flooring. I do this with two goals. The first is that the value of an income property is in part based on the income stream one  generates. Investing capital to return the unit to its original two bedroom layout with a fresh new look will garner a higher rent – and a higher resale and appraised value – which offers me security should anything change from hereon.

While I complete this cosmetic upgrade – stay tuned for the journey and reveal – my next objective is to spend the next six months gathering as much information as possible to determine what the highest and best use of the site can be. I want to keep the income component – but I think there's a lot of opportunity to make this architecturally spectacular.

Here's a couple of preliminary ideas – including one version where I relocate the front entry to the ground floor to create a dramatic stairwell! 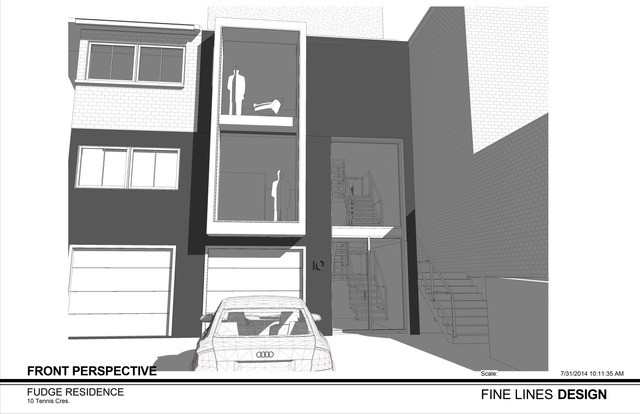 If you like, come join me as I navigate the Tales Of Tennis Crescent!

Like what you've read? Sign up in the box below to receive our FREE monthly newsletter on housing, culture and design!