A Story and Giggle Behind urbaneer.com’s Innovative Space Ads

Since the reign of Queen Victoria (1837-1901), our Sovereign’s birthday – May 24th – has been celebrated in Canada. Declared a holiday by the Legislature of the Province of Canada in 1845, the actual holiday is observed on the Monday which lands on, or before, May 24. This year it happens to be May 21st.

This Statutory Holiday is colloquially known as May Two-Four in parts of Canada; referencing both the date around which the holiday falls (May 24) and the Canadian slang for a case of twenty-four beers (a “two-four”), which is one of our country's favourite libations. Most Canucks know nothing beats cracking an icy cold beer to toast Summer's first long weekend.

In fact, if Queen Victoria were still with us today, I bet she'd be a fan of several Canadian comforts. I was actually pondering this, which led to this week's INNOVATIVE SPACE ad: 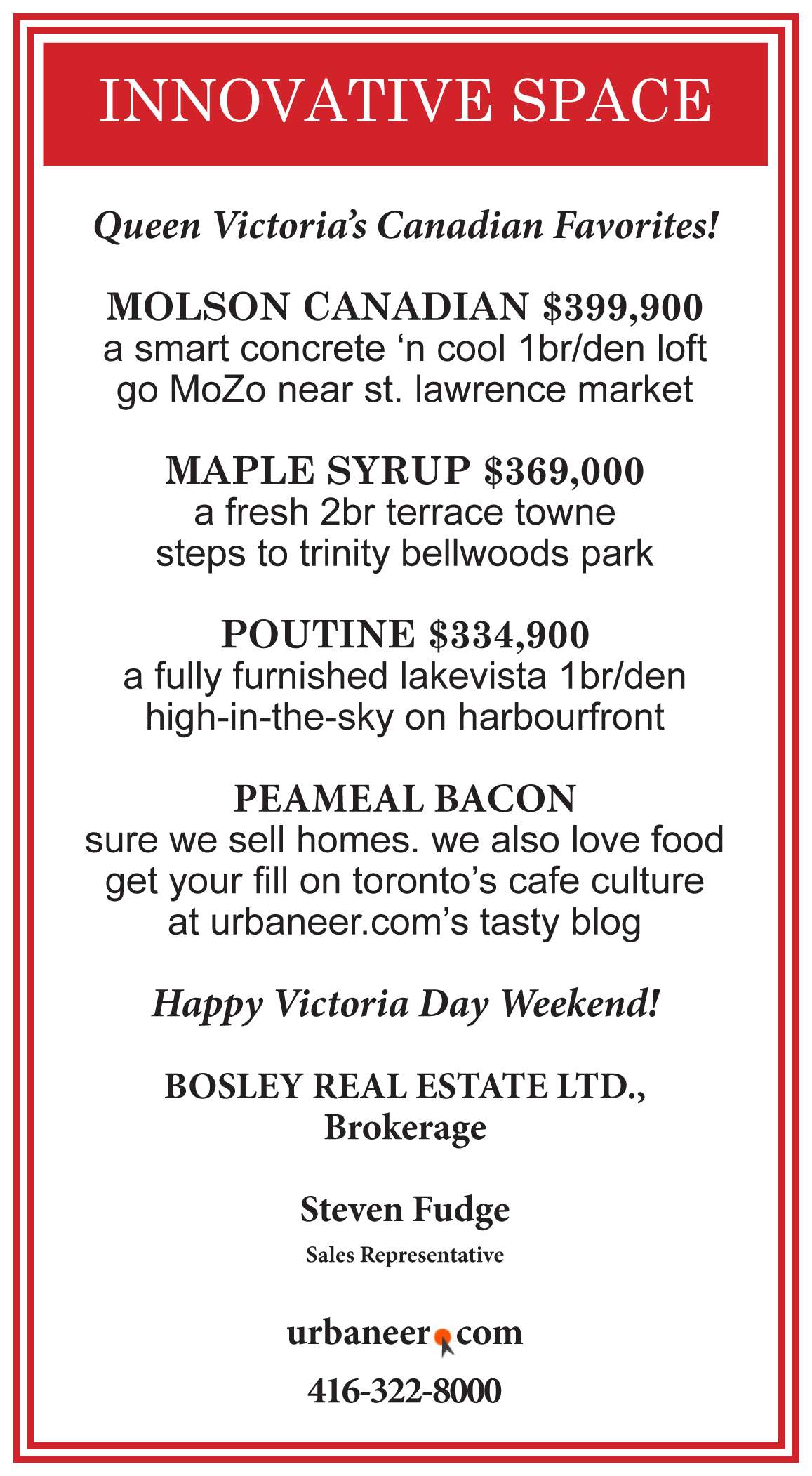 I ask because the urbaneer.com crew know there are those who roll their eyes over our zany adverts. Especially the old-school real estate relics from the golden age of newspapers. Back in the day their fingers turned black with ink as their digits scanned the ubiquitous columns of banal real estate ads that plainly stated the location, dwelling type, number of bedrooms, and whether the basement had a wet bar or wood panelling, all in the most perfunctory and abbreviated manner. In a nutshell, for the better part of last century real estate advertising was rigidly confined within the limitation of location, bricks and mortar, often using dull boring descriptions. It was all practical and zero inspirational. Even as a housing obsessed child (at the age of ten I was making my father take me to open houses), I always thought there was a better way to write real estate copy.

And then in 1989 serendipity presented itself. Armed with a multi-disciplinary education on Housing, I became a Realtor who cultivated his speciality in the sales, marketing and development of several warehouse conversions while pioneering the Innovative Space marketplace focusing on loft warehouses, contemporary dwellings, income opportunities and low-maintenance living.

It's now approaching 20 years since the first INNOVATIVE SPACE column appeared in The Globe and Mail real estate section. And, for the most part, it hasn't really changed. Here's our format:

First, when any newspaper or magazine page is crammed with a lot of small font copy, draw the reader's eye to your ad by leaving lots of white space within a bold border.

Second, always identify a property's geography (whether that be neighbourhood, district or building), for where a dwelling is situated remains the base line by which all real estate is valued.

Fourth, vary your ad using clever, amusing, or silly themes that aren't real estate specific, while keeping your brand logo the same. This guarantees you'll be distinctive from other ads while retaining continuity.

Fifth, be succinct a la haiku. Offer enough information to captivate and intrigue but remain evasive. After all, the objective of a real estate ad is to compel the reader to seek out more information by contacting you.

Finally, create an opportunity for readers to smile. It provides your brand a positive reinforcement while spreading a little joy.

While this may not work for everyone, it works splendidly for urbaneer.com!

Wishing you all a magnificent Victoria Day Weekend!