Often blending geographically with The Annex, Seaton Village, and Little Italy, Koreatown is most well known as the area closely surrounding Bloor Street – roughly between Markham west to Montrose – housing many of the city’s Korean restaurants retailers. But it’s not quite as easy to trace Koreatown’s boundaries as it is for many of Toronto’s other ethnic neighbourhoods.

Prior to the 1980s, people from Central and South America heavily populated the section of Bloor West of Bathurst. Toronto in particular has become home to a considerable number of first- and second-generation Koreans, thanks in great part to Canada’s liberal immigration laws; the past three decades have seen an influx of Korean immigrants to the GTA. A majority settled in the enclave we now call Koreatown, and before long, a small Korean business neighbourhood emerged along Bloor Street, centered on the intersection of Bloor and Manning Avenue. The Korean community has stood by their own culture amidst Toronto’s melting pot of cultures, and in that process, have  enriched the existing neighbourhood with a diverse, cosmopolitan vibe. 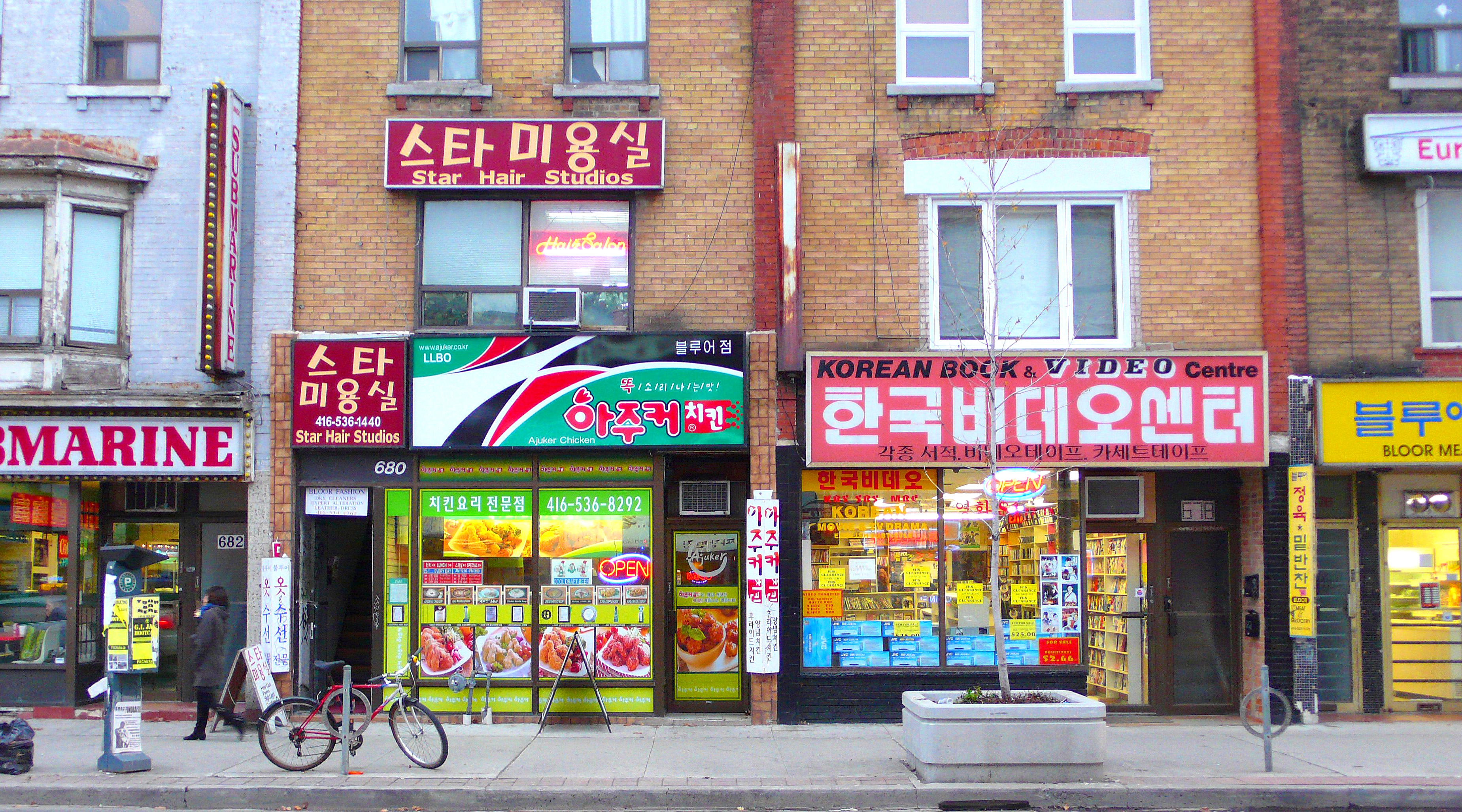 Fun Facts!  According to the last census Toronto as having the largest single concentration of Koreans in Canada! There’s been a huge spike in enrollment in Korean courses at U of T in recent years, which, in addition to immigration and international students, many professors are attributing to the rise of ‘K-pop’ music and other Korean popculture exports! (Like BTS!) 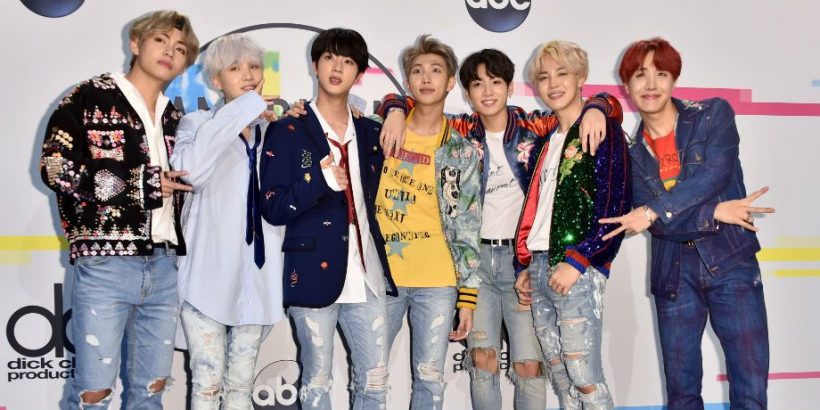 Koreatown features stores and restaurants on multiple stories, with independently run establishments reaching up to higher floors, exuding an ambience of Seoul itself! The vicinity is full of sights, sounds, smells, and scenes that remind us how lucky we are to live in such a diverse city. The community draws a lot of tourism, as well as Torontonians looking for the best in Korean food, groceries, K-Pop nightclubs, and renowned karaoke! To get a taste for the true flavour of this amazing Asian nation, try the chobab (sushi) bars serving some mouthwatering dishes or the canteens that specializes in the signature Kimchi cuisines.

I love the walnut cakes at Hodo Kwaja!!

Have you visited the Poop Cafe?! Always a laugh!

And we always have a blast at karaoke!! There are a few well-rated offerings along Bloor, including Echo Karaoke and JaYuGongGan Karaoke!!

But not all the favourites in the neighbourhood are Korean. One of our go-to joints is Snakes & Lattes, offering food and drinks (and now serving alcohol!) alongside a library of thousands of playable games old and new.

Wouldn’t it be fun to have more diverse and unique offerings in your neighbourhood? Imagine the options for Friday dinners or a Saturday out on the town! Check out this unique urban space at the Button Factory – 200 Clinton Street – just a couple blocks south of Koreatown!

The original factory – which consisted of seven sections built over the span of nearly a century – and its driveways and loading docks underwent a significant transformation in its conversion into townhomes. The ribbon of space running down the south side of the building instantly cried out to be a mews walkway, and by slicing the factory vertically, it allowed each unit to have its own private entry, removing the need for common halls.

My heart goes thumpety-thump for the large bedroom, den, and luxe bath that comprise the first-floor sanctuary of domestic bliss! The stunning second-floor entertainment zone – bathed in natural light and featuring a private terrace – is visually divided into thoughtful living, dining, and culinary zones, while remaining extremely open and airy. Check out those lofty 10-foot ceilings and beautiful red brick walls!!

This Authentic Brick & Beam Loft Townhouse In Little Italy’s Button Factory is on the market for $1,569,000! 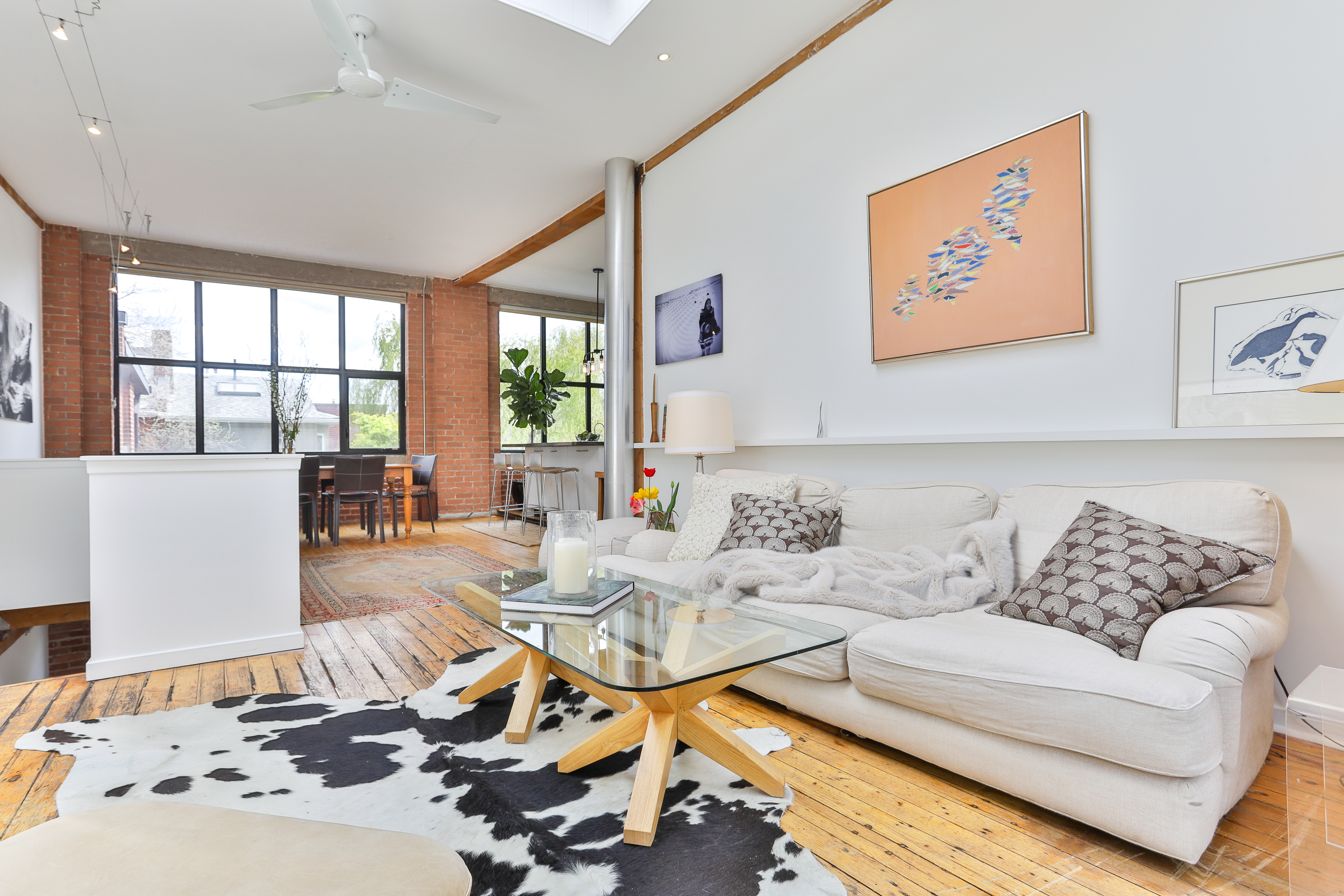 Looking to downsize or upsize in the future? My team and I are here to help!

With decades of experience navigating the ever-changing Toronto real estate market, a commitment to promote the sale of properties like yours with interesting and relevant information, and the ability to guide Buyers with credible insights and well-informed guidance, we are here to help without pressure or hassle.

– we’re here to earn your trust, then your business –

*Did you know we were recently listed as one of The Top 25 Toronto Real Estate Agents To Follow On Twitter! – The Top 50 Blogs On Toronto – and The Top 100 Real Estate Blogs In Canada? Consider signing up in the box below to receive our FREE monthly e-newsletter on housing, culture and design including our love for unique urban homes and other Toronto real estate!