Located south of Bloor west of Parliament, St. James Town – a collection of 19 high-rise and 4 low-rise apartment building ranging from 14 to 32 floors – were built in the 1960s.

Originally a semi-suburban neighbourhood home to the city's middle class in the 19th century, this neighbourhood of Victorian housing stock was rezoned in the 1950s when the City of Toronto announced major zoning amendments for the downtown core. The new zoning significantly increased building coverage in St. James Town making it an instant target for private developers. By the end of the 1950's, a consortium of developers had bought up and demolished St. James Town's entire housing stock in order to build Toronto's first high-rise residential apartment towers. The vintage housing stock was levelled, and the apartment towers — inspired by Le Corbusier's 'Towers in the Park' concept — were erected (Check out this great link on Artsy about Le Corbusier). Each tower accommodated thousands of residents surrounded by green space, but with few amenities. Each of the buildings is named after a major Canadian city.

Coinciding with an era when singles broke free from the social expectation that one lived at home until marriage – and whom began living independently in rental housing – St. James Town was developed to to accommodate this young “swinging single set”. According to Carolyn Whitzman's informative article Social Infrastructure in Tall Buildings: A Tale of Two Towers: “By the time the complex was finished, tastes had changed among this emerging demographic bulge. ‘Swinging singles’ found the lack of convenient shopping and street life in St. James Town a distinct ‘turn off’. The surrounding working class neighbourhoods, in no better or worse shape than the houses in St. James Town condemned as unliveable, were being bought up by the same young upwardly mobile professionals in a process then known as ‘white painting’ and now called ‘gentrification’. The apartments, especially those constructed as public housing, became known as accommodation of last resort for working class and immigrant families, including those who had been driven out by the construction of St. James Town and the gentrification of the surrounding neighbourhoods.”

Here's a 1970s ad targeting the single's market from The Torontoist – in an article written by Jamie Bradburn! Unfortunately the neighbourhood quickly rented to a poorer population. Four buildings were later built by the province to provide public housing. Today, the towers are mostly home to newly arrived immigrant families.

As the buildings decay, debates now centre on further redevelopment of this area. To the north of St. James Town on a triangular sliver of land along Bloor East, Lanterra Developments are seeking approvals for 1800 more units, shown in the illustration below. Here's the post from BlogTO called 'Massive development good or bad for St. James Town?' And here's a great post from BlogTO called 'St. James Town and the messy politics of urban renewal'.

For all the challenges associated with this quadrant of the city, I rather admire this enormous mural on the facade of a building abutting Wellesley Street East. 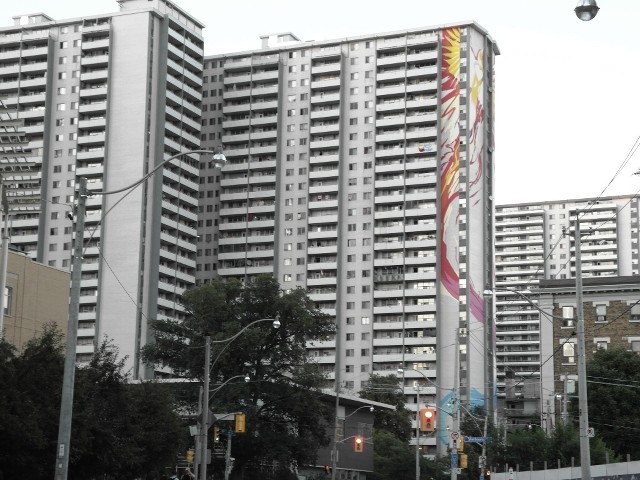 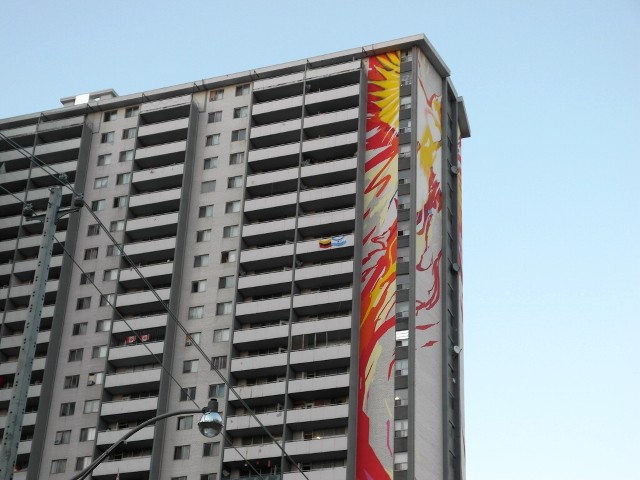 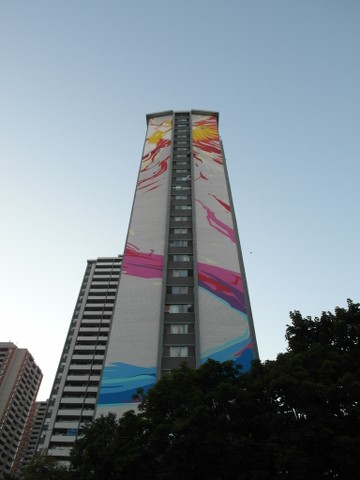 I think this is fantastic! Why not combat the visual blight with something cost-efficient and engaging?

Whether you like the mural or not, even subtle changes like this can indicate a change in a neighbourhood's dynamic. And it can often portend to an increase in real estate values, in particular for surrounding market properties. Here's one of our popular posts called Why Toronto’s East Side Real Estate Has Historically Been Cheaper. It provides more insight on why Cabbagetown and Corktown could be strategic real estate investments.

Like what you've read? Consider signing up in the box below for our FREE monthly newsletter on housing, culture and design in Toronto, Ontario, Canada.